The Best of Borrowdale Rock Climbing 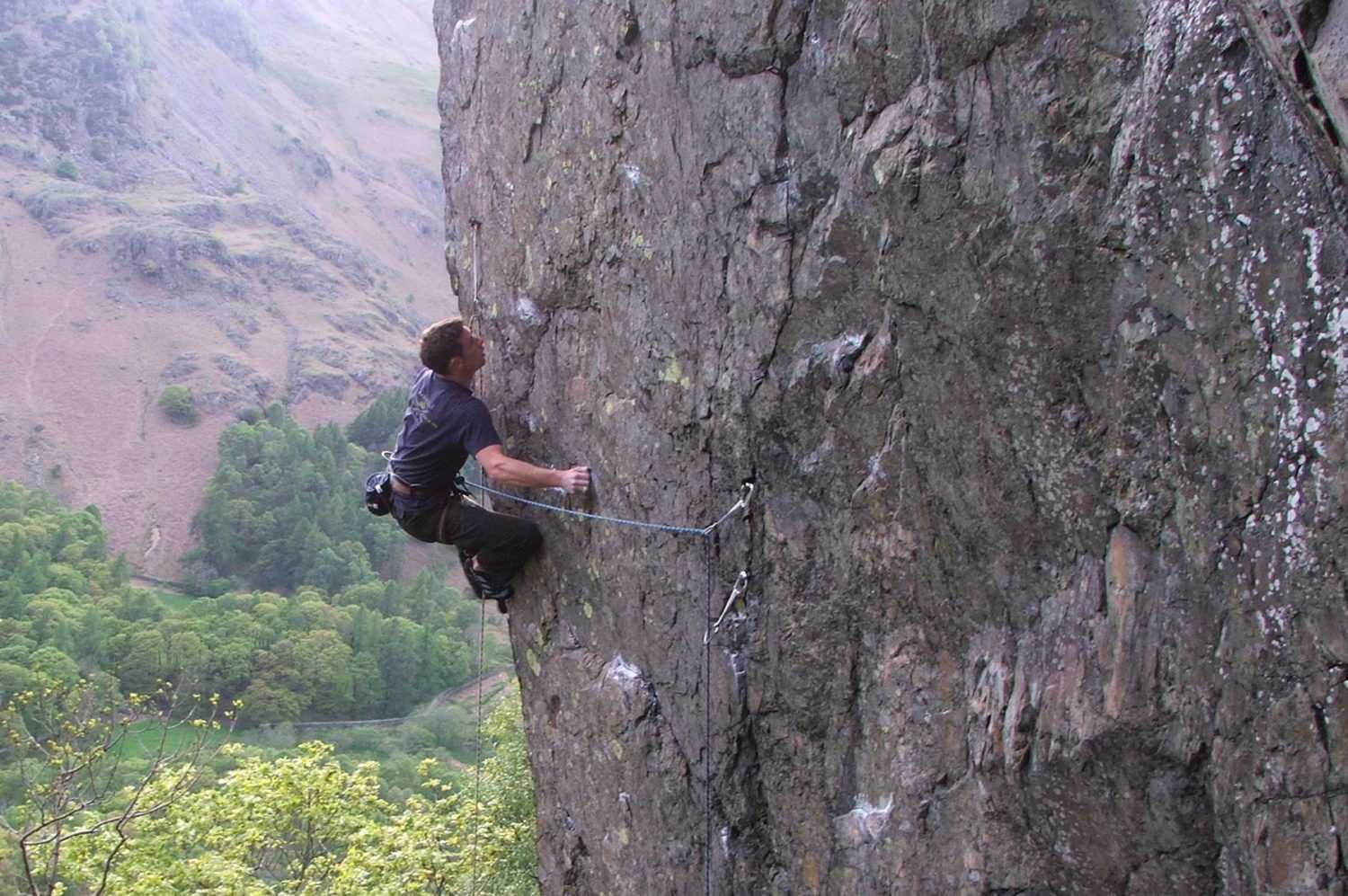 Twelve of the best rock climbs in the green valley

With the Covid-19 lockdown upon us, it’s a great time to reflect on our past experiences and savour some of the moments of joy and fear that compel us to climb and to remember some of the special places and friendships that have been forged along the way. This is the first of five articles celebrating some of the best climbs from different areas of the Lake District, starting with the Best of Borrowdale Rock Climbing. I’ve chosen twelve routes and picked lesser-known gems as well as some of the classics. It’s not intended as a glorified tick-list but as a personal account of why the routes and crags are so special.

As Borrowdale is at the heart of the Lakes and having been introduced to climbing here as a young lad, it seems like a good place to start. The valley is home to the largest area of native broadleaf woodland of any of the Lakeland valleys, and therefore it’s also one of the greenest. At almost 14 kilometres long and with crags littered along its length, it’s a wonderful and bountiful place to climb.

I’ve included routes right across the grade spectrum apart from those at the very top end (as I haven’t done them!) and each article will include four easier routes (Diff – VS), four medium grade (HVS – E3), and four harder (E4 – E6/E7). Hopefully, once we’re able to get out onto the crags again it might inspire you to get out and do one or two. Here are twelve of my favourite routes:

Raven crag always feels like a dark and sombre place for such a low-lying crag. However, on closer inspection, it’s actually very friendly with lots of nice big ledges. This atmosphere is actually what makes the crag so good. There are virtually no defined paths up to the base of the crag and this adds to a feeling of remoteness despite the relatively short approach. Corvus is a wonderful route and one which I usually use once or twice a year when guiding clients. It gives welcome shade from the heat of the mid-summer sun and is equally good in the pouring rain in big boots! The hand-traverse on the fourth pitch requires thought in order to protect your second. Walk off via Thornythwaite fell or follow a wall from near the top of Raven Crag gully diagonally down back to the base. A real mountaineer’s crag!

Arguably the most stunning outlook from any crag in Borrowdale. Facing south-east this mountain crag gets lots of sun and is best saved for a crisp sunny spring day with a sprinkling of snow still lingering on the higher fells. There are a couple of approaches to this crag but in dry conditions my preferred route is to walk in from Honister, heading south-east to cross the broad grassy shoulder that comes down off Grey Knotts. Hit the highest fell wall above Seathwaite and follow it around to the start of the route. The first three pitches of Gillercomb Buttress are on lovely clean rock, however above that, the route becomes a little less interesting and nondescript. Keep heading up and left following a broad rib overlooking a large gully and you shouldn’t stray too far off route. Walk back down following the old fence that runs NNW off Grey Knotts or down the broad gully on the right of the crag. 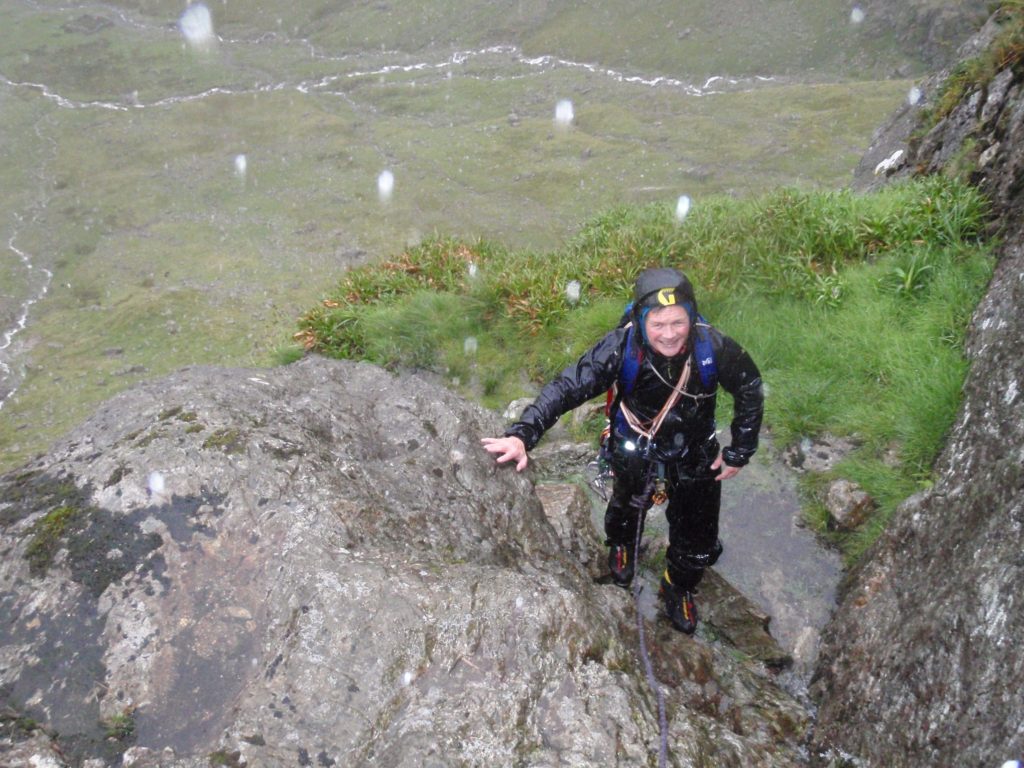 No list of great routes in Borrowdale would be complete without including Troutdale Pinnacle. It’s one of my favourites at the grade but it’s also worth considering one of the numerous equally brilliant but slightly harder variations. Early summer and autumn are great times to climb this route as it’s often a bit quieter and the colours of the trees below are simply stunning. The belay at the top of pitch 3 (before the big traverse) can be awkward and ropework on the following traverse pitch needs careful management. It’s worth extending gear well before the short down climb and subsequent climb up onto the pinnacle itself.

Lower Falcon is up there with Reecastle as one of the best evening crags in Borrowdale. In summer it catches the last of the light before the sun dips down behind Catbells on the other side of the lake. The crag itself seems to have lost popularity over the years and has a reputation for being loose and scary. As with any crag, there are loose sections but all of the routes with two or more stars are brilliant and generally fairly solid. Hedera Grooves is one of the most solid routes on the crag and the section above the holly tree up to the top is probably better than any route at Shepherd’s crag at a similar grade. Go and find out for yourself!

This great little crag has increased in popularity over the last few years and it’s not hard to see why. A short approach and sunny aspect combined with great quality clean rock. Granted, there are better routes at the grade in Borrowdale but this place is well worth a visit if you’re looking for somewhere a bit different.

This was one of my first E1’s and definitely a big lead for me at the time. I’d heard all of the stories of people falling off and cutting through slings on the sharp edges of the pinnacle. I built it up in my head to the point that I was both terrified and desperate to give it a go in equal measure. I’ve done it several times since including in the dark and it’s still one of my favourite routes and no push-over at the grade. Getting onto and leaving the pinnacle is the crux. You just have to go for it! 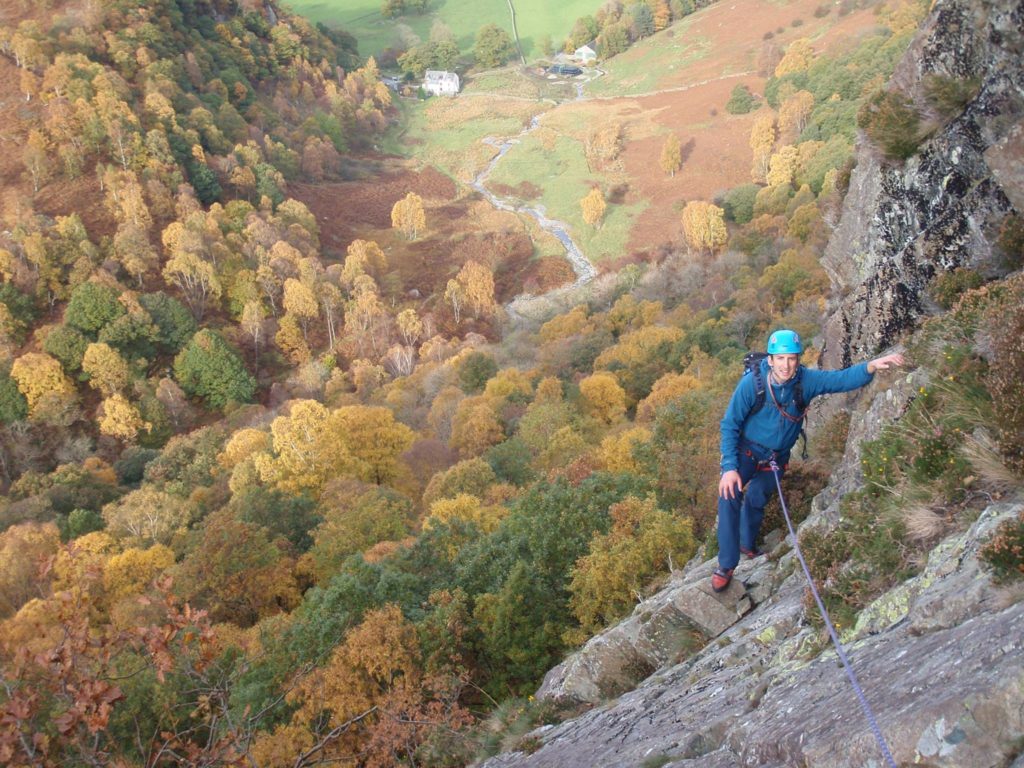 A contender for the best E2 in Borrowdale? With positions and atmosphere usually reserved for E5’s, this amazing route requires a confident approach. The remnants of some of the old rotting pegs used on the first ascent mark the way. The first crux pitch features a delicate and committing traverse into the niche, but don’t be fooled, most people find the easier 5b second pitch harder and certainly more exposed! With careful ropework, both pitches can be strung together to avoid an awkward stance in the niche itself. Classic!

Along with some of the crags in Langstrath, Reecastle is home to some of the best rock in Borrowdale! The crag isn’t short of fantastic E3’s but I think this one is the best. After a pokey start with fiddley gear, the base of the crack can be gained, and good medium/large cams protect the crux. The climbing keeps coming at you, but it’s well endowed with good small-medium size wires. Also done in the dark and dubbed ‘Black Silence’!

In the middle of summer this crag looks like a scene from Jurassic Park, however, there are a handful of brilliant routes which when clean are up there with the best in the valley, and Nagasaki Grooves is definitely one of them. When I first did this route I abseiled down to clean it first. It was also really well cleaned last year and I had an opportunity to repeat it again with Esther Foster on a warm summer evening. The crux section is well protected by small wires but the moves themselves are really unobvious and committing. Banzai Pipeline and No Holds Barred are two other must-dos on this neglected crag. 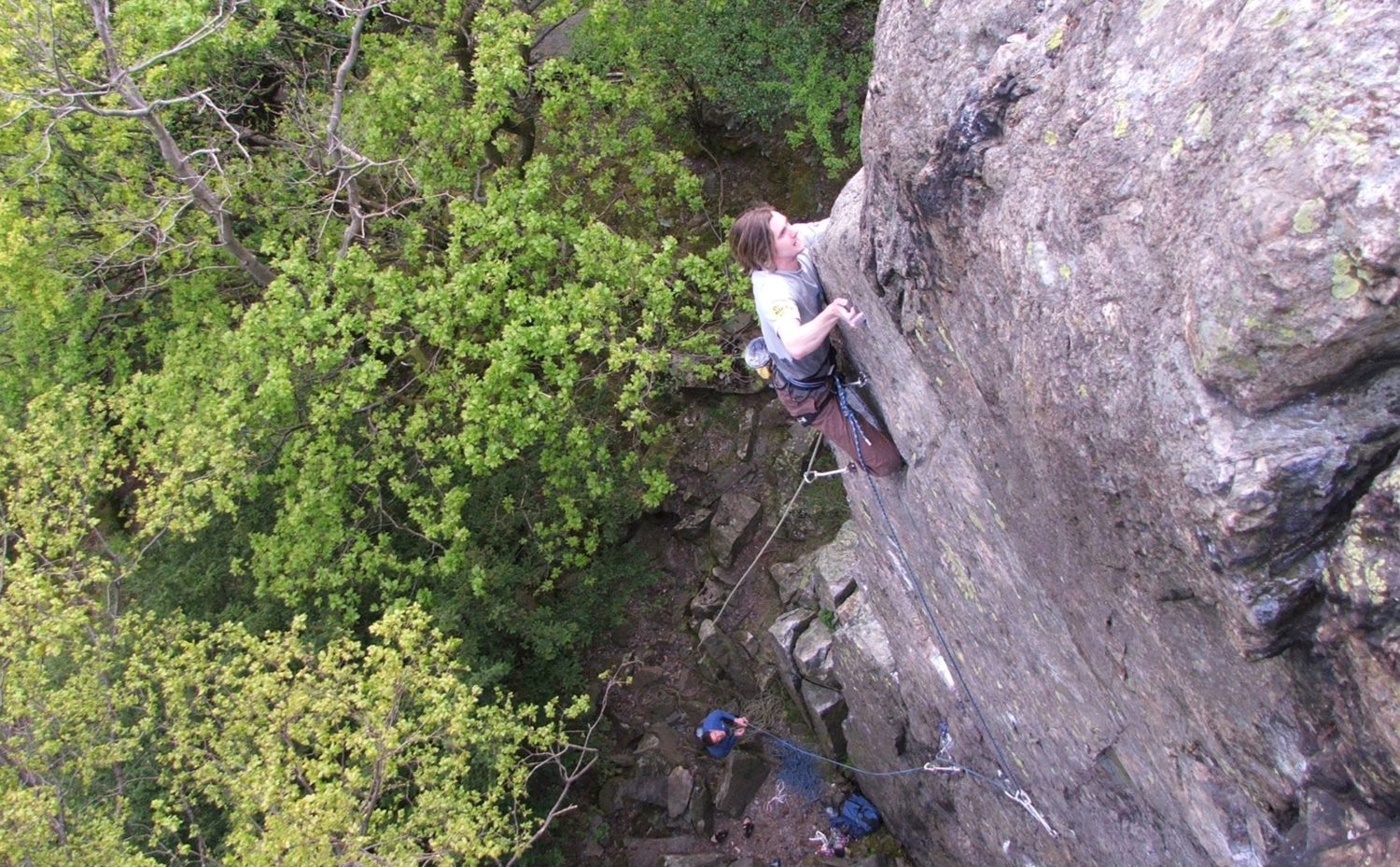 The crux of Inferno

The sheer quantity of brilliant routes on this crag make it one of the best in the valley. It has a reputation for being dirty but it’s rarely as bad as people think. If it’s big bold routes that you’re after then Mirage, along with Bitter Oasis and Footless Crow are the best trio in the valley. I made the mistake of missing a high runner before stepping right onto the rib on the first pitch and regretted it as I scraped my way onto the slab above, only making it by the skin of my teeth! The second pitch feels really committing to start with just a sling draped over a small spike to protect you. A piece of in-situ tape a little higher lures you upwards and you soon find yourself in an amazing position on the top section of Bitter Oasis.

South of Rosthwaite the valley splits into two and beyond the hamlet of Stonethwaite, sits the entrance to the adjoining valley of Langstrath. This valley is also home to some great climbs with the brilliant Sergeant Crag Slabs being one of the more popular venues. Cam Crag on the opposite side of the valley is another fantastic but less frequented crag. The rock is similar to Sergeant Crag Slabs but being a bit steeper and more featured it lends itself to harder routes. Some quality recent additions have been made by local lad Adam Hocking in the last few years. Camikaze is one of the more amenable routes here and offers beautifully delicate rather than strenuous climbing. The crux is well protected by a peg or two, followed by bold climbing up to the final bulge and a committing pull over this which is protected by a small cam and wire. A real must-do!

A crag where sport and trad climbing meet… sort of! The arête of Bleed in Hell is one of the most striking lines in Borrowdale and Inferno roughly follows this but incorporates the crux of Hell’s Wall to start and finishes up the final section of De Quincy. A desperate route of the highest quality and well protected by dozens of old pegs which are generally pretty good. This route became something of a nemesis for me with repeated failed attempts, however, perseverance is key on routes like this. The harder routes on this crag are almost always dry but humidity in the middle of summer can make them feel much harder. A cold, crisp and dry day in spring or autumn often gives the best conditions.

I hope you’ve enjoyed this article and if you feel inspired and would like to arrange some guided rock climbing with us then please get in touch.

« What’s in a grade: How do grades work and do they matter?
The Best of Langdale Rock Climbing »